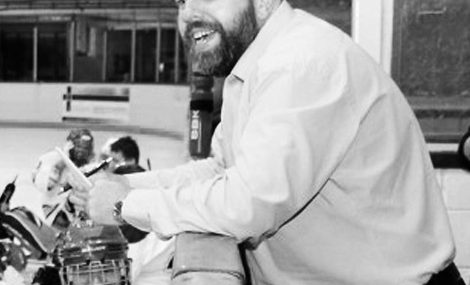 Head Coach Ian Offers, has been involved in the sport of Ice Hockey since 1999 when he watched his first game in Finland, whilst working for Nokia.

After years of watching Football, the speed and skill of the sport grabbed his attention. He started working for the Peterborough based Pirates, later to become the Peterborough Phantoms, running their website as well as working on their supporters club and even driving the player’s bus to away games for a number of years.

When he was given the opportunity to try the sport his initial foray lasted 2 weeks before he fell and broke his wrist! Once recovered he was back on the ice, signing up to play for the Peterborough Predators.

After a few seasons of playing he sat his Level 1 Coaching Qualification as he wanted to give something back to the sport and help new players. After helping coach the Junior clubs Learn To Play sessions, where he taught children aged 4-9, he moved to help with the Under 18s team for 2 seasons.

After taking a break from coaching for a few seasons, he returned as Head Coach of the newly formed Peterborough Flyers. The Flyers were an adult Learn To Play team, formed from new players to the sport. At the same time, he was also asked to help with the Peterborough Phantoms Para Ice Hockey team.

Initially, he said no to Para Ice Hockey, as the sport was alien to him, but after watching a few training sessions he agreed to join the club. When the then Head Coach left the club, Ian took over what is now the most successful Para Ice Hockey club in the country over the past few years.

The Phantoms Para Ice Hockey Club won the League title in 2013, 2014, 2015 and 2016. They have also taken the Play-Off Tournament trophy for the past 3 years that it has been contested.

In 2015 he became assistant Coach for the Great Britain Para Ice Hockey Team and also returned to coaching Ice Hockey after accepting an invite to coach Cambridge University’s Women’s Team.

In early 2016 he became the Head Coach of the Great Britain Para Ice Hockey Team and his first International tournament was taking the GB team to Japan in November 2016 for the IPC World Championships.

How he has the time for all of this, and a full-time day job, no-one knows, but everyone is grateful that he does !